Did you know that you can navigate the posts by swiping left and right?

Like most people, I found out how important controlling fermentation temperature is only after making a huge mistake and letting a batch of beer ferment about 10 degrees Fahrenheit over the yeast strains max temperature. And it was so horrible I had to dump it all, it wasn’t even close to drinkable. And I think my next actions where the same as most others as well, got my hands on an old cheap fridge (stand up freezer in my case), purchased an STC-1000 relay with temp probe, and built something I could control fermentation temperature with. 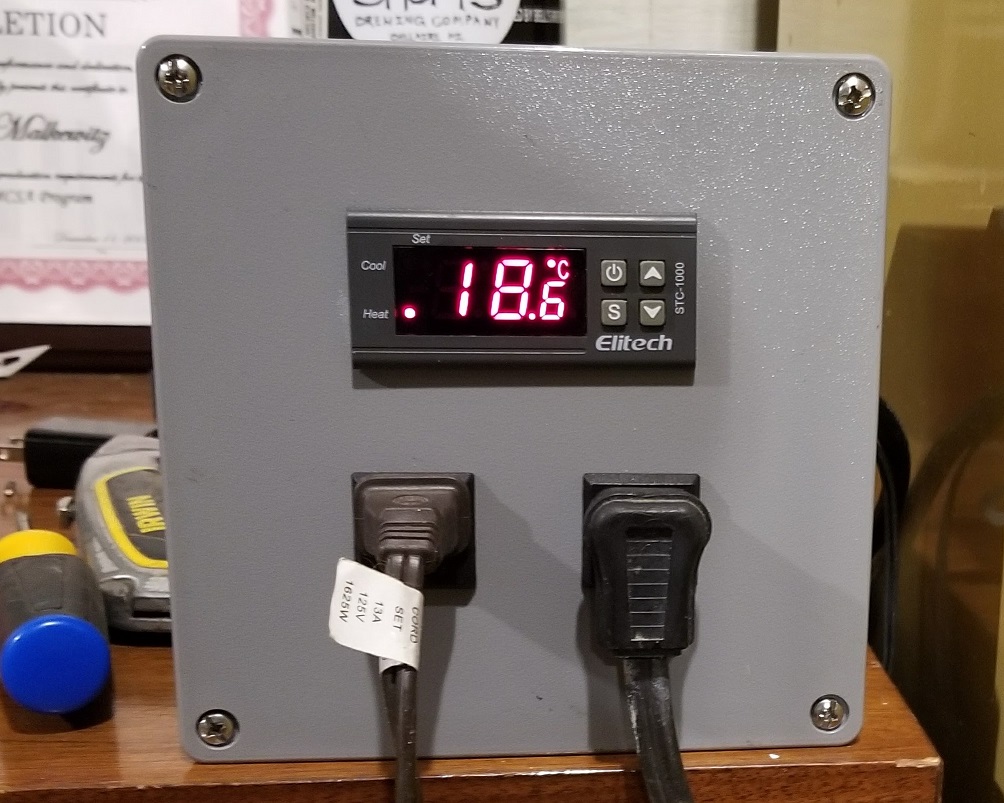 This is a quick, and cheap solution, and it does work, but the biggest issue I was running into, was temperature swing. I would set my target temperature, and when it would cool, it would sometimes go 2-3 degrees Celsius (yes, I bought a Centigrade controller by accident, and they are one or the other) past the target. Then the heater would turn on and go 1-3 degrees over. And, especially as fermentation wound down, and the beer was creating less of its own heat, this would get even worse. And I’m sure this doesn’t affect the beer tremendously, but I still didn’t like it. Also it seemed like it was making my freezer and heater work much more then necessary as they where fighting each other. There has to be a better way!

I started my research around the interwebs looking for other ways to build (or buy, but we all know building is more fun) a temperature controller, seems most everyone does it with the STC-1000 or some variation of it, but I kept seeing talk about building a BrewPi. And the more I looked into it, the more interested I became. And at the time, I did have an extra Raspberry Pi laying around, so that made it even more appealing being that is one of the more expensive pieces of the project. The concept is pretty close to the STC-1000, the only real difference is you adding a second temperature probe (or more), and microcontroller (an Arduino Uno in this case) that runs a PID. Basically, the system will learn how your fermentation chamber heats and cools, and it can compensate for the temperature swings. I know what your thinking, how much better can it be then the STC-1000. Well, my first batch I fermented with this held the center of the beer to .01 degree Fahrenheit for the entire primary fermentation process. Now, even if a few degrees doesn’t affect it that much, I’m sure that holding the temperature that steady is going to produce a better final product. And, it gets even better, after learning how the profiles work with a BrewPi, you can set it up do all sorts of different things. For example, with my last beer, when I dry hopped it, I set it to slowly bring up the temp to max in the yeast range over a 24 hour period, then hold that for 24 hours for a diacetyl rest, then as quickly as possible, bring it down to 34f for a cold crash, and hold that for 48 hours. And I never have to touch anything for that.

If you’ve made it this far, im guessing that means your still interested in building one of these bad boys. And that is one of the main reasons of this writing, when I built mine, the info to get it working was spread all over the web, I had a bunch of dependency issues, and one obvious thing, was a case to hold it all, none of the articles or how to’s, or blogs, did anyone really ever tell how they have this thing in production. And there is more then a few parts, and well, 110v running in it, so I thought that was a pretty important part, so I’ll show what I used for a case to house this controller.

Also, I want to make this clear, the development of the BrewPi over the years has out grown and surpassed what the Arduino is capable of. What does this mean exactly? Well, what you’d be building by following the instructions of this blog, is what would be considered a “legacy” version of BrewPi. The Developer of BrewPi, Elco Jacobs has actually created a pre made unit that is available for purchase, that uses the current version of BrewPi and is actively developed and well maintained. If the DYI thing is not for you, maybe check out the BrewPi Spark. And Because we will be making a legacy version of BrewPi, There will be no software updates or new features, but it is very solid and stable, and does work very well. And, if you really want to make a change or add a new feature, you can always fork the BrewPi Repository, and put the code changes in yourself!

You will be working with electricity while building this project, if you’re not comfortable with that or don’t know what you’re doing, do not attempt this build. Anytime you need to work on the hardware of this system always, always, always unplug it completely. There will be 110v running inside this circuit. PROCEED AT YOUR OWN RISK!

Lets start with a shopping list shall we. Now, you don’t need to buy these via the links I am providing, they are merely for context. Also, look in your junk drawer, things like the RaspberryPi and Arduino power supply I found around the house, one was an old phone charger, and the other was to and old light that I hadn’t seen in years. The power cable is from an old computer. I used some Romex wire that I already had as well.

I think the best place to start with this project is setting up the Raspberry Pi and the BrewPi software. The easiest way to do this is to use the NOOBS installation of Raspbian from raspberrypi.org (you can install any flavor of Linux you like, but Raspbian is what I have built my BrewPi on). Here is what you will need to configure the SD card using Windows, sorry if your using Linux to copy the image to the SD card, you’ll have to figure out those steps yourself (Same goes for flashing the hex file to the Arduino Uno):

Installing Raspbian on your Raspberry Pi is pretty simple:

Now, the install will take about 10 minutes, while it is going, go ahead and plug the Arduino Uno into your computer via a USB cable so you can flash the BrewPi firmware onto it. You will need to download the following items for this:

You need to identify the COM port the Arduino Uno is on, to do this open your Device Manager:

After extracting the Arduino Sketch Uplaoder, flash the hex file to the Arduino Uno via the Windows command line replacing DownloadPath with the file path to the location of the hex file and Number with the number you found in Device Manager: 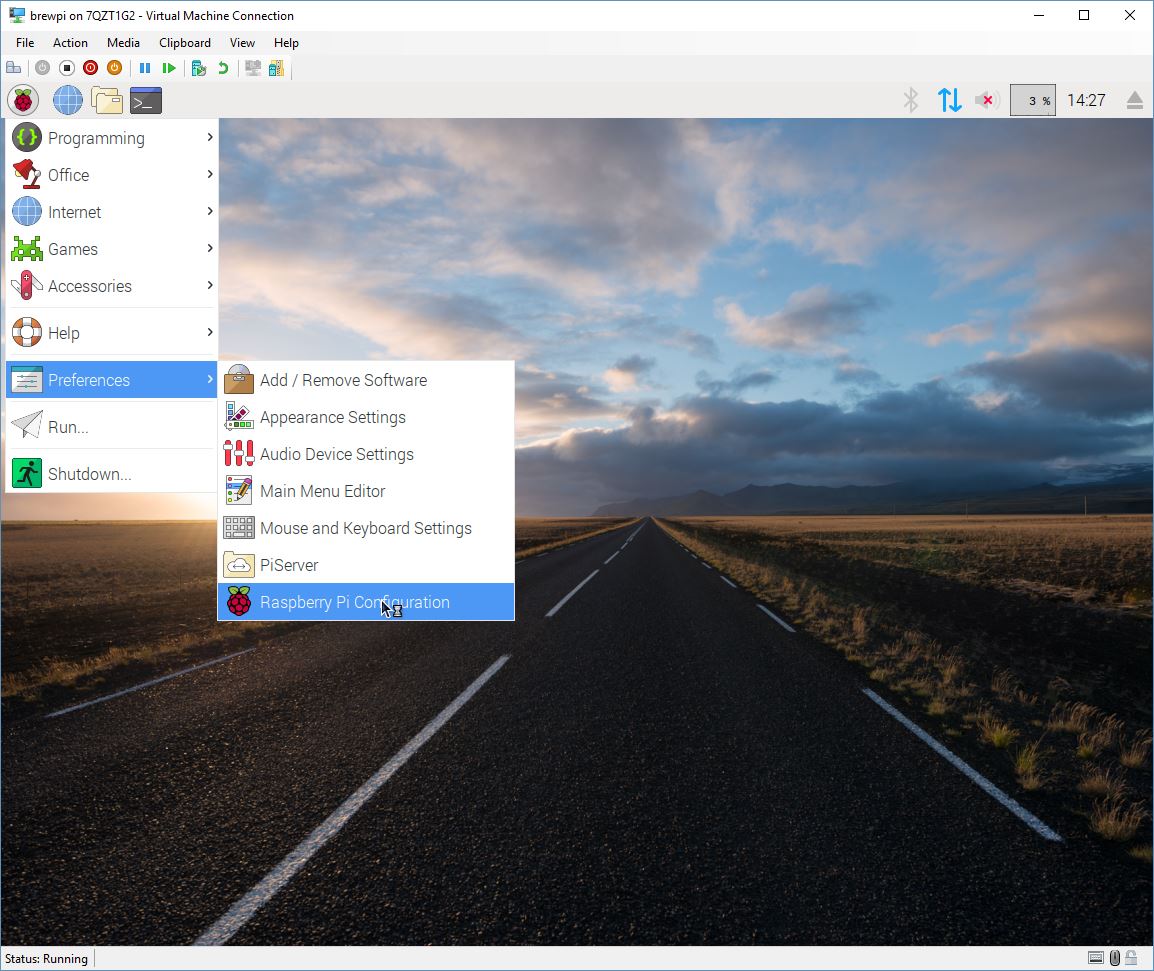 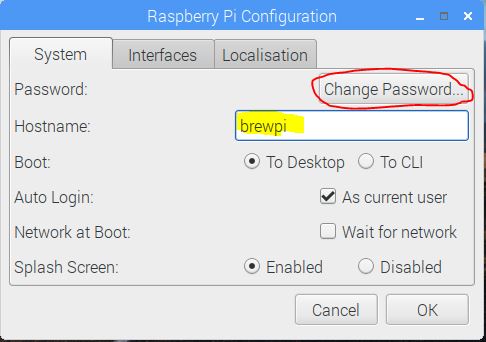 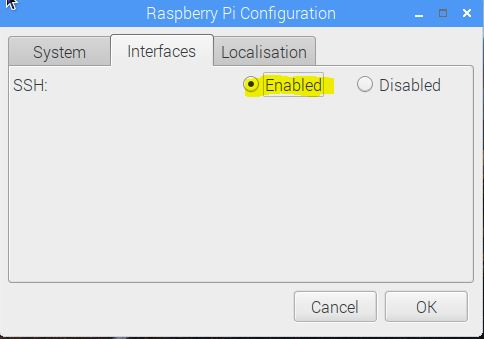 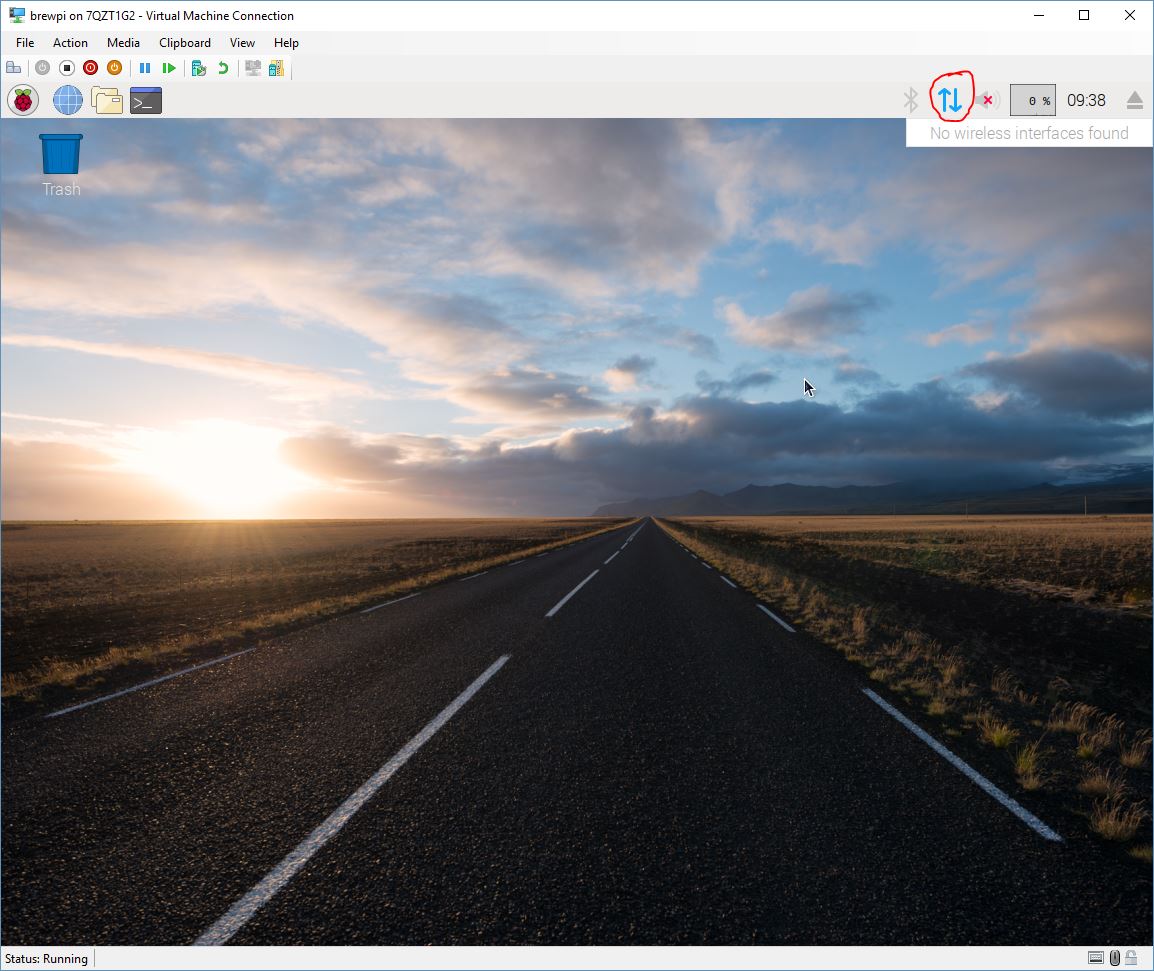 For the rest of the Raspberry Pi configuration, I’m going to be using a remote connection via SSH from my actual workstation, you can leave your keyboard and mouse plugged in, and use the bash terminal and run all the same commands. I’m doing this because if your like me, you have an old rickety keyboard, some crappy monitor, and no mouse hooked up, so SSH is just easier. Im not going to go into detail about SSH from a Windows machine, you can search that out if you’d like, there are more then a few ways to use SSH from Windows out there (none enabled by default unfortunately). I am using the SSH client that comes with MINGW64, which I have installed because I use Jekyll and Ruby, which is what this blog is written with. 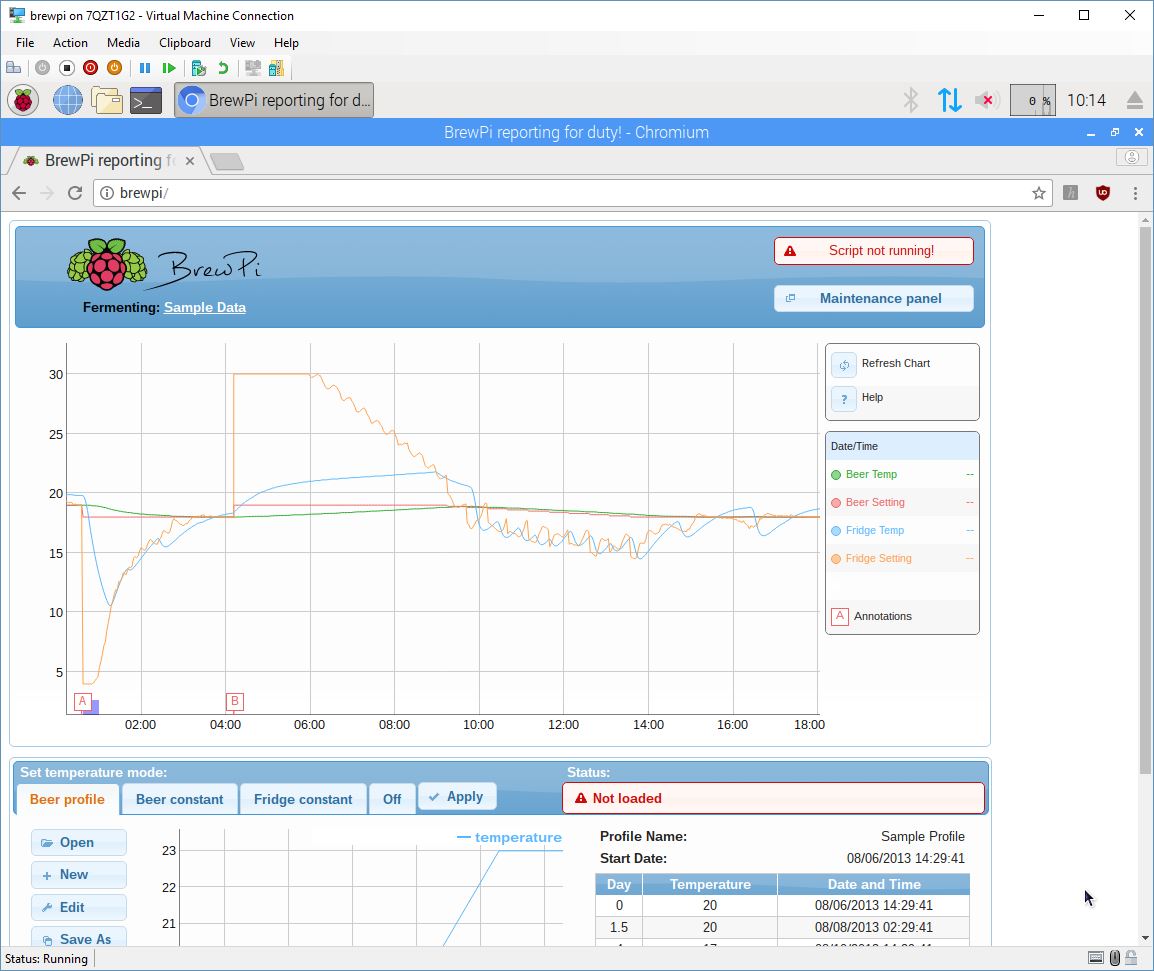 Thats it for setting up the Raspberry Pi!

Next, lets take a look at the general power schematic, The only thing missing from this sketch, is the Raspberry Pi. This part just hooks up via USB to the Arduino. The Raspberry Pi is the web server, its how you will interface with the BrewPi, setting temperatures and building profiles. Credit to FuzzeWuzze from HomebrewTalk for the schematic.

One other thing I did, was if you go look at the case I suggested you purchase from Amazon, it has a built in outlet. This has many benefits, basically if you go power into that outlet, and then piggy back off it as the source in, you can then keep the power supplies for the Raspberry Pi and the Ardunio Uno inside the case, else you are going to have two temperature probes, and three power cables hanging out of this thing. So you don’t have to go with that case, but I suggest you do. One other perks, is it has a compartment below the panel, this gives you a place to hide wires. So, I just played around with the layout of all my pieces inside my sprinkler case, until I got everything to kind of have a place, then I used small dabs of hot glue to hold everything in place. Here is what it looked like before I glued everything in place: 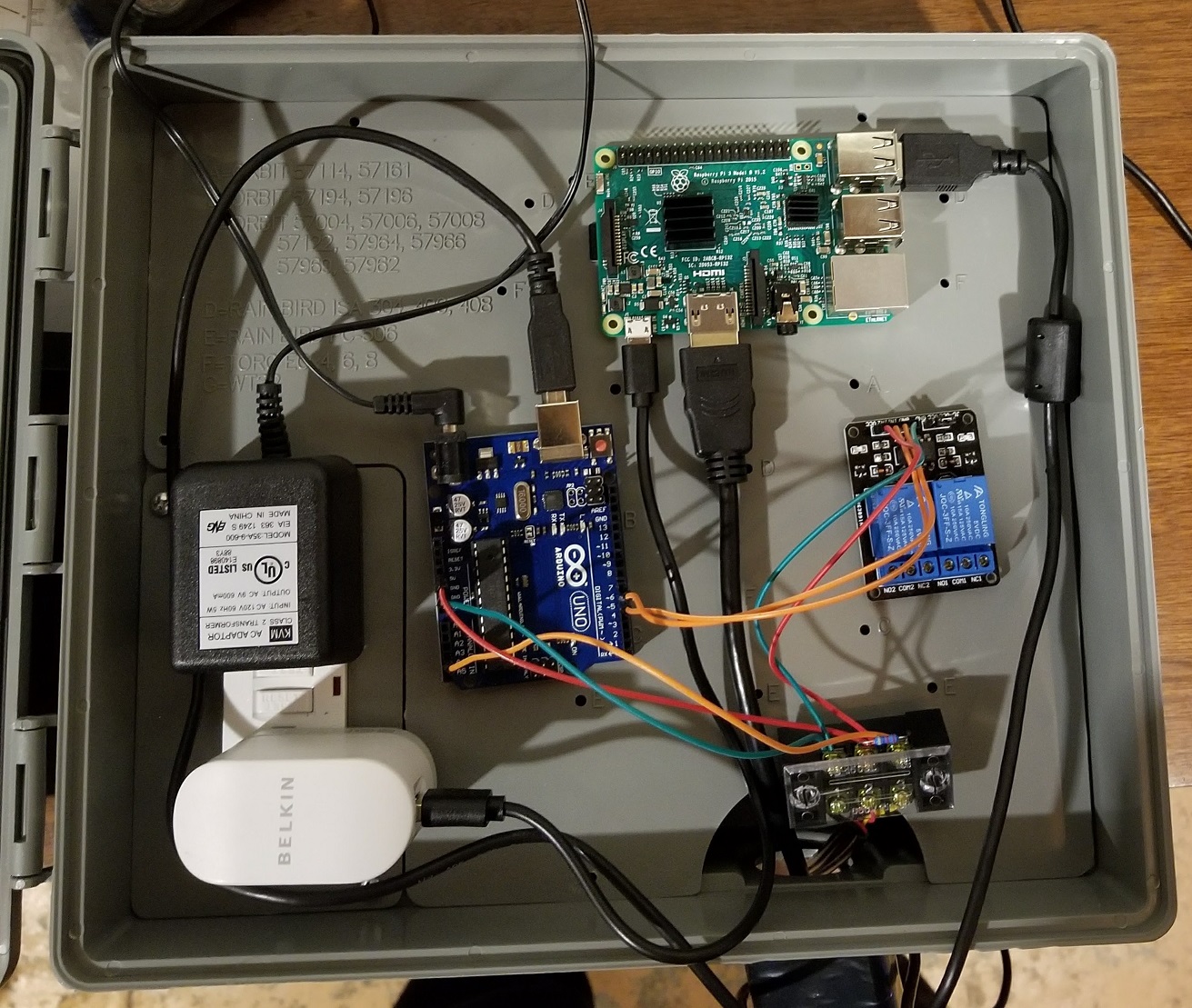 . Next before I glued everything, I cut holes for the specific outlets I purchased (link in shopping list section) in the lower right hand side, below the removable panel (sorry, the best picture of this I had was from the finished product). 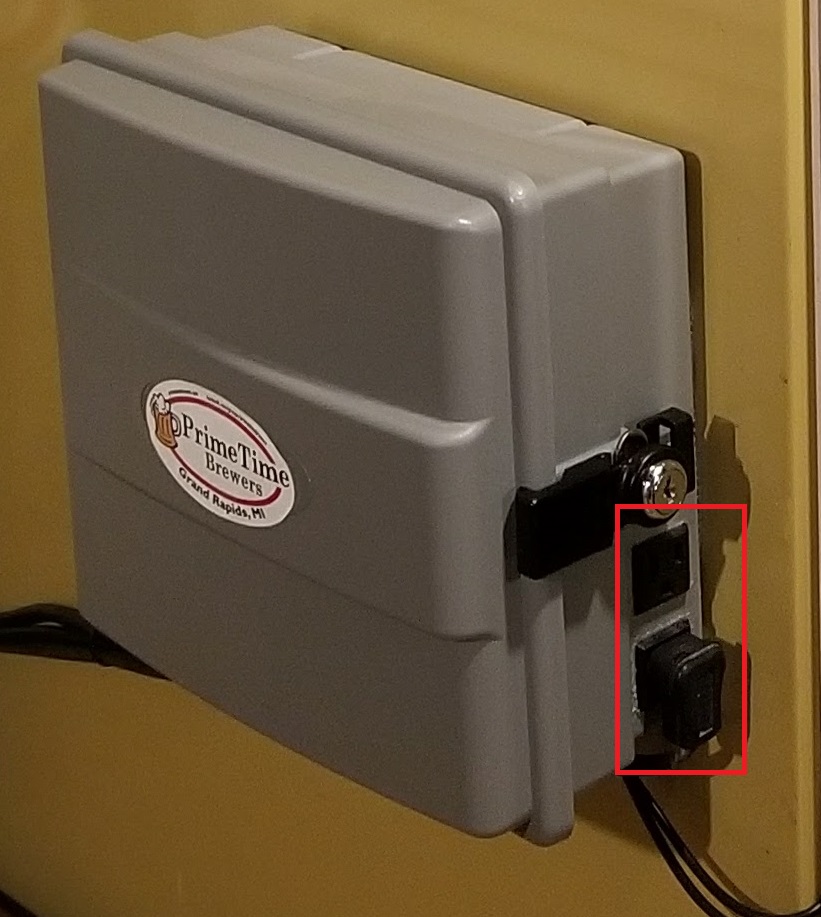 after I got all the outlets in and secured, I then ran wires long enough for them to reach the relay, then I glued all the components and put the panel back in. I did some other little customization, such as the usb cable from the Raspberry Pi to the Arduino Uno, I filed a little notch and ran that behind the panel, because it was a 5ft cord that needed to go 10 inches. You can make yours as nice or as neat as you’d like. Here is the finished product: 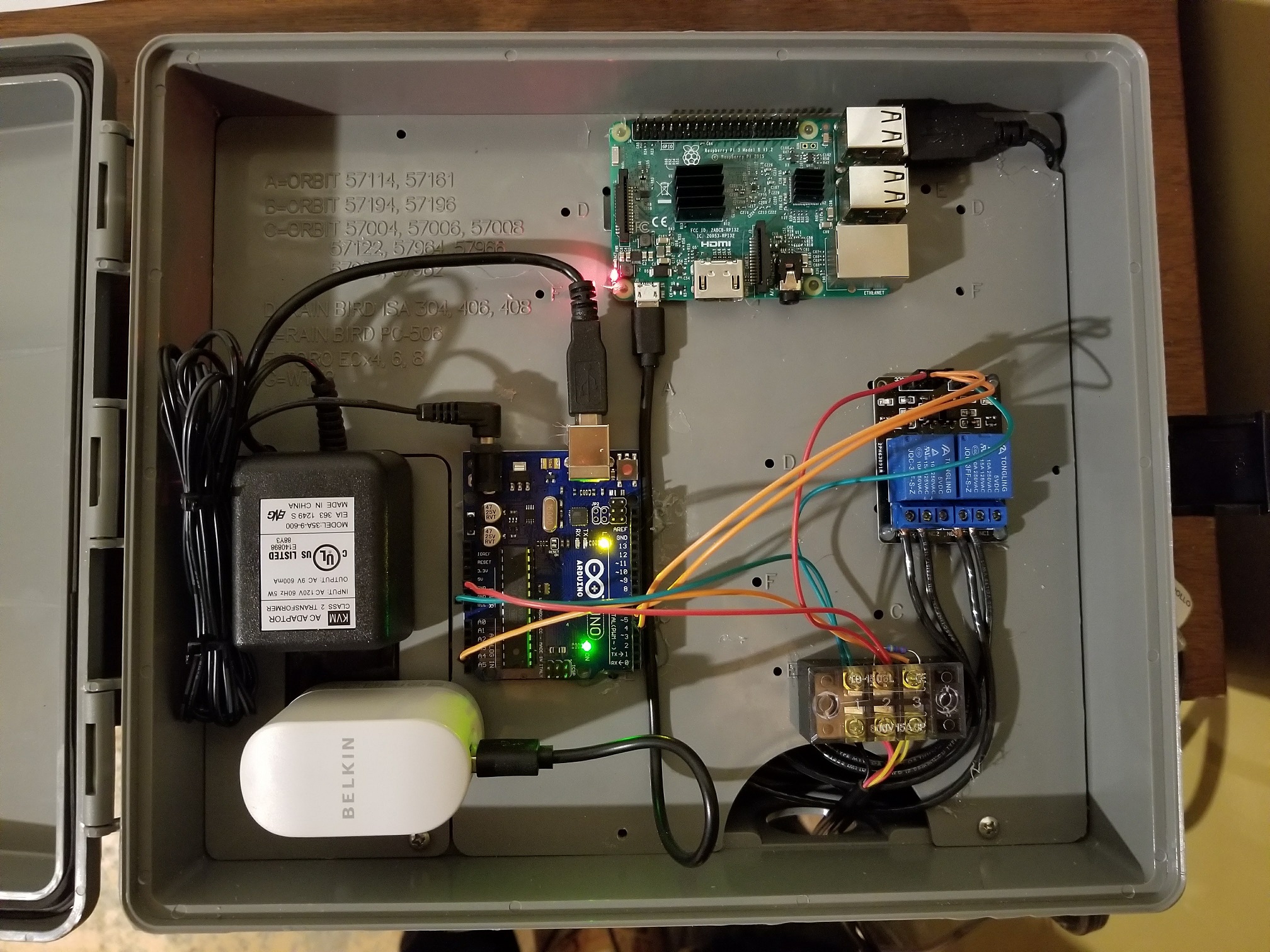 Configuring the BrewPi and Arduino

If you’d made it this far, congratulations, you’re almost done, and its almost time for a beer. The only thing left to do is to actually configure your BrewPi to talk to the Arduino Uno.

Now if you go back to the web interface, in the top right, the script will be running (this may take a few minutes). Now, the only thing left to do is identify and configure your temperature probes and heating/cooling elements, to do this go to the maintenance panel (top right).

And thats it, you’ve made your BrewPi! You can control temperatures via Beer, fridge, or a profile. So go have some fun!

Here is an IPA I have fermenting right now: 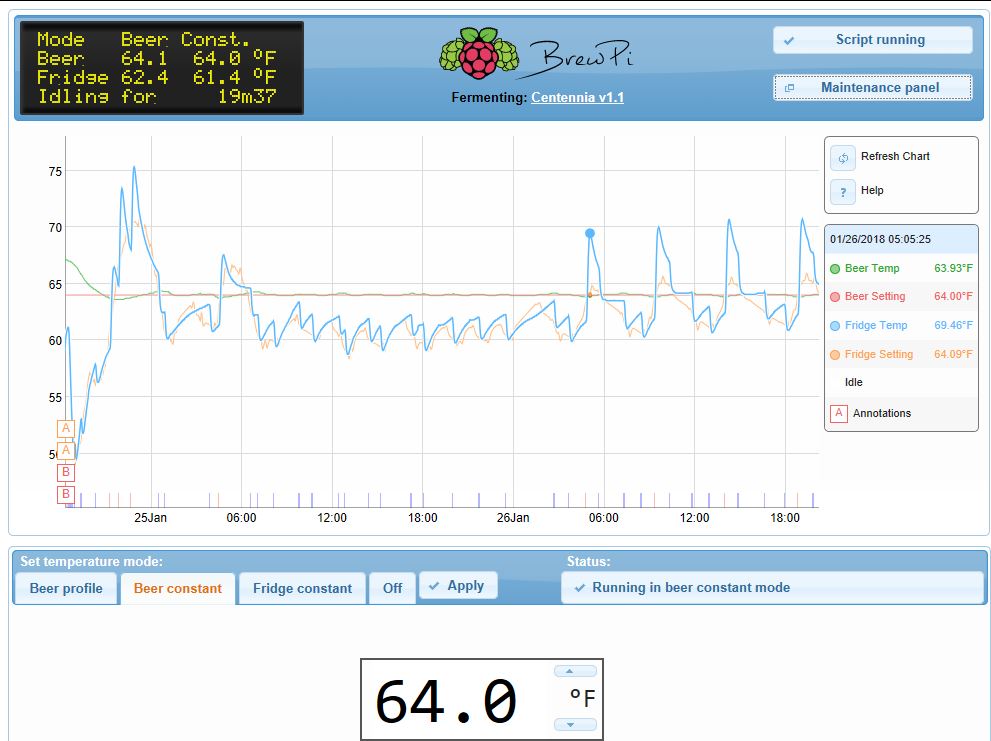 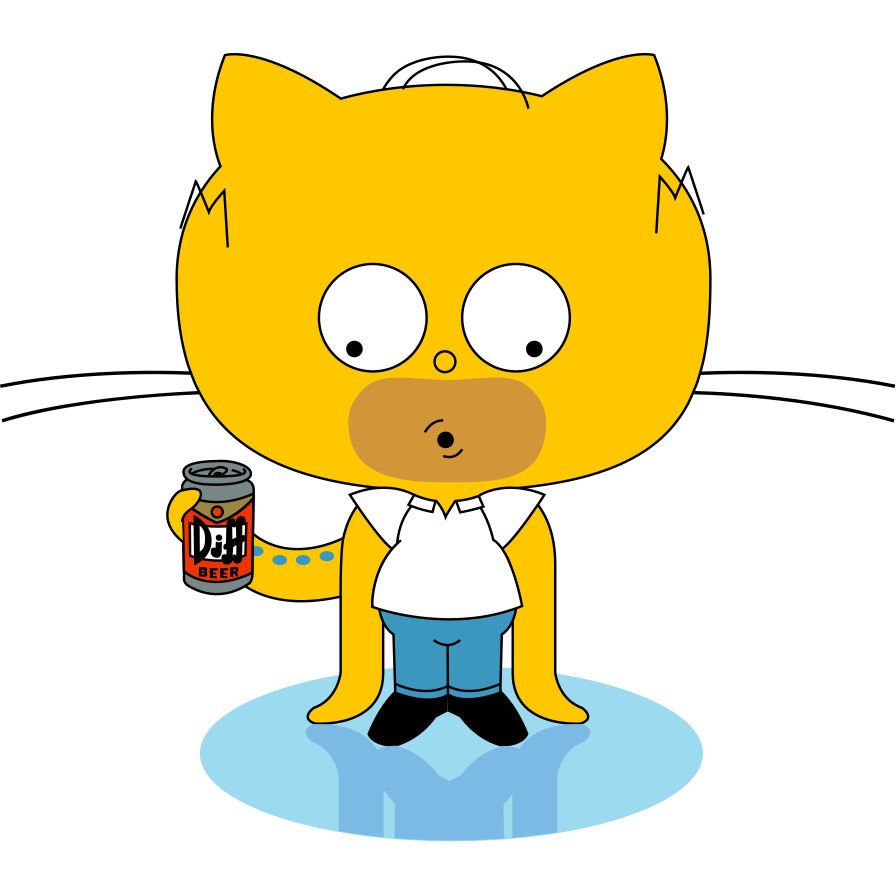 Just a beer drinking Github-er, automating daily tasks with PowerShell, or whatever. And sometimes I go outside and ride my bike. But mostly I just drink beer.